2017 has been a particularly busy year in the world of J-Pop. It’s seen the return of old favourites as well as the emergence of new talent. Meanwhile, the UK has hosted some amazing events along with some great acts from Japan making their UK debuts. Here’s J-Pop Go’s review of the year…

January saw the release of a collaborative effort between Kyary Pamyu Pamyu and Charli XCX on ‘Crazy Crazy’. The result was a stripped-down Yasutaka Nakata-penned number that had a suitably bizarre face-swapping video.

But Kyary also released a new tune under her own name the same month. ‘Harajuku Iyahoi’ presented a more wistful side of KPP, but was still a charming slice of J-pop confectionery.

Rock outfit BAND-MAID also returned with their 4th studio album Just Bring It, winning new fans in the UK when the album received a simultaneous release via JPU Records.

Elsewhere, AKB48 were the topic of a BBC video which looked at the idol group’s regular Senbatsu Janken Tournament where members competed to be the singer of the next lead single. Miku Tanabe took the prize during the Rock, Paper, Scissors game in an event the BBC described as “the Hunger Games of Japanese pop music”.

February started off with the tragic news that Rina Matsuno of Shiritsu Ebisu Chugaku had passed away. Rina Matsuno had originally been part of idol outfit Minitia☆Bears prior to joining Shiritsu Ebisu Chugaku in 2010. The idol group had announced that she would be unable to appear at a planned Ebichuu concert due to health issues. Matsuno was resting at home for the day, but her condition worsened and she sadly passed away in hospital.

Perfume returned with new song ‘TOKYO GIRL’. Marking their 28th single release, the song also served as the theme music to the drama Tokyo Tarareba Girls (which also featured A-chan debuting as a voice actress). It was a more sedate outing for the technopop trio (and bore a striking similarity to KPP’s ‘Harajuku Iyahoi’).

In March, iconic rock outfit X Japan released the soundtrack to their documentary We Are X. The band also staged a signing at HMV in London to mark the occasion ahead of their concert performance at Wembley.

4-piece rock outfit The Tomboys returned to London for a special live show. The band were supported by London-based No Cars (who also announced that this would be their final gig). J-Pop Go handled DJ duties for the event which saw a packed venue and Team Tomboys giving an electrifying performance.

Kyary Pamyu Pamyu released new song ‘Easta’ which, not surprisingly, was dedicated to the traditional springtime celebration of rabbits and eggs. There was also a bit of wordplay at work as the song title can be read as “Ii Suta” which is Japanese for “it’s alright”.

April also brought more tragedy when Roland founder Ikutaro Kakehashi died. Technoop pioneers YMO were one of the first bands to get to try out Roland’s legendary TR-808 Rhythm Composer (Their track ‘1000 Knives’ was the first studio recording to make use of the 808). Similarly, musicians such as Susumu Hirasawa (P-Model), Kenji Kawai (Ghost In The Shell) and musical collective Geinoh Yamashirogumi (Akira) all utilised Roland gear.

The Idol Formerly Known As LADYBABY released ‘Pelo’ – a much harder rock sound than previous tunes which seemed to be tacking closer to the idol metal of BABYMETAL.

FEMM returned with ‘Do It Again’ which featured a collaboration with US singer-songwriter LIZ (along with some input from FAKY’s Lil’Fang). As with KPP’s collaboration with Charli XCX on ‘Crazy Crazy’ earlier in the year, the song saw an intriguing mix between J-pop and western pop. The video also featured a clever use of the ‘split depth’ technique to achieve a fake 3D effect.

FEMM also made their UK live debut in April as part of a special pre-Hyper Japan performance. The event also featured chiptune musician Shirobon and, once again, J-Pop Go handled DJ tunes for the night.

Bouncing back from tragedy, Shiritsu Ebisu Chugaku released their Ebi Cracy album in May

In the summer, MAN WITH A MISSION returned to the UK for their first headlining performance in London. Daito Manabe of Rhizomatiks, who has a history of working with Perfume, was a guest at the UK’s Bluedot Festival. Meanwhile, occult-inspired idol act NECRONOMIDOL staged their first European tour, which included their UK debut performance.

In July, Hyper Japan presented its usual combo of Japanese culture, events and (of course) Japanese musical acts. This included the UK debuts of Moso Calibration, REOL and Toriena. Their stage performances went down a storm with the attendees, although sadly REOL announced they were splitting soon after.

The summer also saw Idol outfit Dempagumi.inc rocked by the departure of Moga Mogami. In a statement, Moga said “I’ve been unable to find the balance between my mind and body, making it difficult to continue activities as a member of Dempagumi.inc in this state”.

Perfume followed up their February release with new outing ‘If You Wanna’. In this case, the new composition is part of a campaign with oral care and body product outfit Ora2. Meanwhile, the additional track ‘Everyday’ featured in the Panasonic AWA DANCE campaign. ‘If You Wanna’ presented a serviceable electropop number with a polished and smooth line in melodies and a few dubstep moments thrown into the mix.

July saw the welcome return of Utada Hikaru with the release of digital single ‘Oozora de Dakishimete’. A second release, titled ‘Forevermore’, was released on 28th July. This marked Utada’s switch to the Epic Records label as her contract with Universal had expired earlier in the year. Her last album for Universal, Fantôme, had appeared in 2016.

In September, one of the year’s biggest surprises came when Namie Amuro announced her retirement. Choosing her 40th birthday to make the announcement, she announced a new compilation album titled Finally, which featured new recordings of her classic songs. A farewell tour would also be scheduled which would include Namie venturing outside of her native Japan for the first time, but with September 2018 fixed as the date of her retirement from the world of music.

In Idol Pop news, Momoiro Clover Z were announced as the first female idol group to appear on MTV Unplugged.

As the winter months crept up there was a rare English language interview with Yasutaka Nakata. “I think the key is I don’t see myself as an entertainer. I ultimately want to express the feelings and ideas I have, and play music that I’m interested in”.

In October, FEMM released their new album 80s/90s J-POP REVIVAL which saw the mannequin duo covering a selection of classic J-Pop tunes. Pop rock outfit Touch my secret made their UK debut in November. Elsewhere, Himezawa followed up on her 2015 release ‘Wagamama Love’ by issuing her debut album Spades & Stars.

Hyper Japan returned with its Christmas Market, which saw performances from the likes of LOVEBITES, FEMM, MUTANT MONSTER and emerging idol duo BOO. The rock acts stole the show in the chilly confines of London’s Tobacco Dock, but it yet again demonstrated the increasing appeal of Japanese music acts in the UK.

Tokyo-based Harpist and music teacher Julia Mascetti had emerged on the anime con circuit with her unique cover versions of classic anime tunes. Teaming up with musician and producer Oliver Wood, she worked on a series of original material which evolved into the In Distance, Everything Is Poetry EP. The 4 track release took its inspiration in part from Julia’s time living in Japan.

In November there was another shock announcement as Rei Kuromiya announced that she would be withdrawing from The Idol Formerly Known as LADYBABY. The decision appears to have been influenced by a throat condition that could have seen Rei endanger her future as a singer.

In December, Utada Hikaru put out a new single titled ‘Anata’. The song was also used as the theme for the movie Destiny: Kamakura Monogatari.

The same month, rock outfit VAMPS announced that the band would be going on hiatus. The band, which features HYDE (L’Arc-en-Ciel) and KAZ (OBLIVION DUST) have been active since 2008. In an announcement, they stated “We felt overheated in our activities and needed a cooling-off period.”

Similarly, Charisma.com also announced that they going on indefinite hiatus. Gonchi had decided to retire from the entertainment industry to help out with her family’s business and the duo’s final activity will be a farewell concert held at Zepp Tokyo in January 2018.

December also saw some surprising news for Dempagumi.inc. The idol group announced that their line-up had expanded to 7 with the addition of Rin “Perorin” Kaname and Nagi “Nemo” Nemoto from Niji no Conquistador.

Although 2017 is coming to a close, 2018 promises a lot of interesting music and stories to come. SCANDAL will return with new album Honey. Utada Hikaru will release her seventh studio album, as yet untitled. Meanwhile, Studio Ghibli composer Joe Hisaishi will be the focus of the reissue of a 1984 LP by the composer.Kisshō Tennyo was produced as a musical accompaniment to a 1980s manga and offers an insight into Hisaishi’s lesser known works as a producer of electronic music. 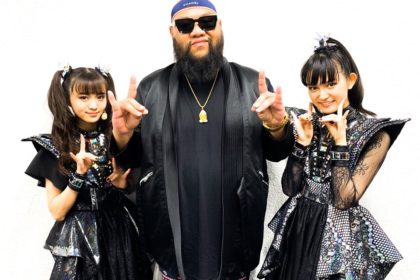