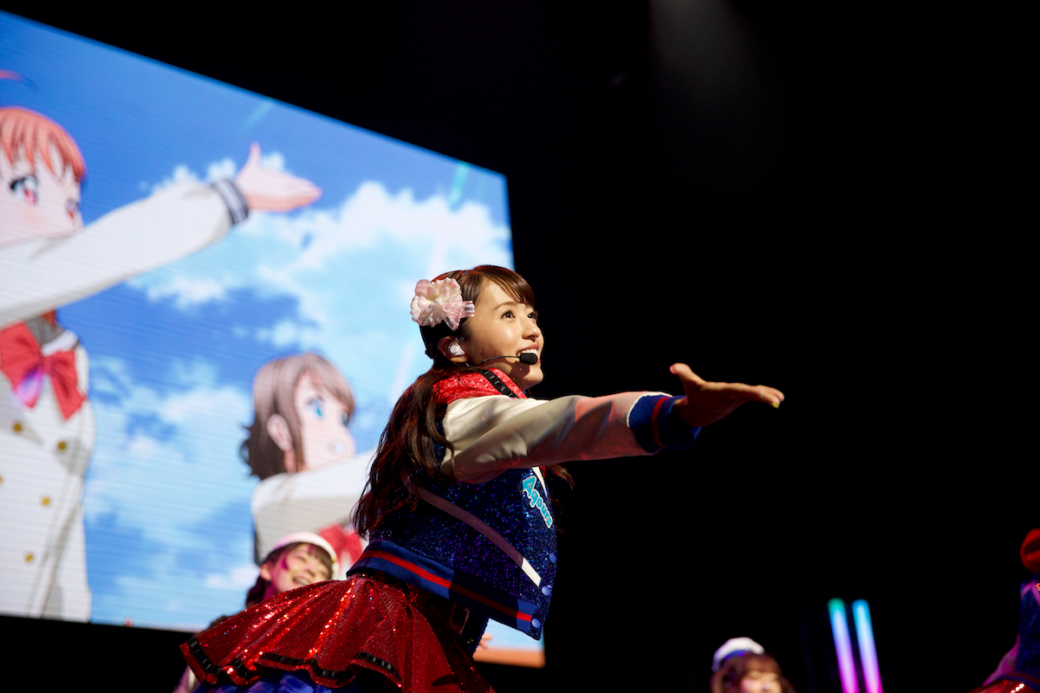 A celebration of love, friendship, and happiness…

The cast of Love Live! Sunshine!! rocked the house this weekend, making The Novo in Downtown Los Angeles feel like Numazu City in an interactive concert featuring beautiful memories from seasons one and two – and even some songs from the new movie, Love Live! Sunshine!! The School Idol Movie: Over the Rainbow!

On the second and the third night of Anime Expo 2019, thousands of Love Live! fans lined up to experience the concerts the Aqours would hold on the weekend of the 4th of July. The house was packed with fans in cosplay and twice as many concert lights to cheer on their favourite high school idols. The audience looked like a sea of multi-coloured lights.

Fans were excited and anxiously awaiting for Aqours to hit the stage when, 3 by 3, the girls ran out onto the stage singing ‘Bokura no Hashitte kita Michi wa…’, sending the crowd into a unison scream. Donning beautiful red, white, blue and pink sequin dresses, the girls then quickly transitioned into ‘Thrilling One-way’, an inspiring and fiery song that immediately raised the energy of the room, especially with the fire effects on the screens behind them. After a very energetic rendition of the intro to the first season of Love Live! Sunshine!! set to the “hey-heys” and screams of the crowd, the girls stopped for a brief introduction. Each member introduced themselves and their characters and as they did, the light wands in the audience’s hands took on each girl’s colour, showing the fans’ support. Aina (Mari) received cheers for being the USA Poster Girl, Kanako (Hanamaru) spoke to the audience in English a lot, and Rikako (Riko) tested the audience to see if they knew all her favourite things… and they did!

Once they were done with introductions and telling the audience how happy they were to make new memories with their fans, the Love Live! Magic continued with the sweet and heartfelt ‘Mattete Aino Uta’.

After a few songs, the girls did a quick wardrobe change and came back out with black sequin jackets decorated with ribbons in each of their colours. The songs in this section felt a bit flirtier, and a bit more mature overall, giving us the same feeling as watching the girls grow throughout the anime series. ‘Daydream Warrior’ was an especially fun, almost clubby song that the girls clearly had a lot of fun performing and the audience jumped and pumped their light wands in the air to the electronic beats.

Halfway through, the already interactive concert became more so with a short intermission in which the audience was shown a skit with chibi versions of the girls in which they are holding auditions for Mari’s future fiancéé. Hilarity ensued when Chika and You decide they’re both up for it and the audience gets involved by simply clapping. It was cute and fun to interact with our favourite characters like that! After a full wardrobe change, Aqours came out in beautiful white and blue frilly dresses and dark blue prince suits inspired by the newly announced movie, Love Live! Sunshine!! The School Idol Movie: Over the Rainbow. Nanaka (Kanan) and Aina (Mari) were especially owning the prince outfit. Then, they performed “Brightest Melody” and the audience was rocking along with Aqours.

After announcing the movie release, the show continued with two first day performance exclusive songs. These were beachy hits like ‘Koini Naritai AQUARIUM’ and the cheerful ‘Kimi no Hitomi wo Meguru Boken’, songs that were just perfect for an anime convention held in sunny California.

During the second day of the show on July 6th, Aqours decided to surprise their fans by introducing two new songs to the show. The first exclusive, the members sang to the beat of their third single: ‘HAPPY PARTY TRAIN’, a popular hit on YouTube that the fans were very excited to hear live. Aqours members danced in synchronisation to the video playing on screen and they absolutely loved when the girls sang their solo under the spotlight.

The second song exclusive to the last day performance was ‘MY LIST’ to you!, a very affectionate song that had the audience clapping and dancing to the rhythm. The song represented the excitement of the group and the love they felt to be performing once again in Los Angeles.

All good things must come to an end and so Aqours had to say goodbye. Some of the girls said, “I love you!” and others “See you soon!”, they all said, “Thank you”, and it was clear that their night was already a wonderful new memory made. But that didn’t mean the show was over. They closed the show with their first single, the hit ‘Kimi No Kokoro Wa Kagayaiteru Kai?’.

After Aqours disappeared from the stage, the audience, of course, begged for an encore and the girls obliged, coming out in Aqours concert t-shirts and grey pleated school skirts to perform a few extra songs to convey how much they appreciate and love their fans, including the very fitting ‘No.10’ and ‘Thank you, FRIENDS!!’.

Despite the group missing Arisa Komiya (Dia), it was a fun-filled, exciting, inspiring, and all-around doki-doki experience with Aqours at Anime Expo 2019 and the girls promise all nine members would come back next time!

Our thanks to qdopp for the review and photos.