Originally hailing from Germany, HIMEZAWA spent a brief time in the UK before moving to Japan where she became a model for Asobisystem.

Her cosplaying career kicked off in 2009, attending events such as the German Cosplay Championship and the European Cosplay Gathering. Himezawa’s UK tenure saw the aspiring performer making appearances at events such as Hyper Japan, MCM Expo, London Anime Con and Anime Attacks.

The decision to move into music was inspired by Daoko, Perfume and Flaviyake. The end result is a slice of melodic pop that kicks off with buzzing synths and bright vocals. The song switches down a gear at the halfway point to give us a dubstep-inspired breakdown and a darker mood before jumping straight back to the bright electropop of its first half.

“I always wanted to try making music” recalls Sabrina Schultes (aka Himezawa), musing over her debut release, “As I grew up I really got into J-pop, but in the west there aren’t as many chances and definitely not as much choice as in Japan. So when I got more serious about it, I began to practise more and more and take lessons and it led me up to auditioning for a music label, and I passed”.

The label in question was Grow Seeds, a small Tokyo-based record label who were very flexible about how to take things forward. “The label really wanted to get my character right, so they decided to let me come up with an idea for the debut song myself”.

“From the beginning I planned out the music video and the way the song would go with it, which made it easier for me, but harder for the people at the label, because they couldn’t see what I saw during the sketch phase. When it was all finished we presented it to the head of the company and I remember him saying ’It’s crazy. I like it’”.

The video for the song serves up a variety of familiar settings and themes, including a school and a Gothic Lolita-inspired section. The result is a fractured window on identity and acceptance – not the usual themes for J-pop. Where did the inspiration for the song come from?

“Everyone will take a different message from it, and I hope that it’s the one they need to hear when listening to it. But I would say there are three main topics that are very clear, as they stand for the three different parts of the song”.

“When I wrote the script for the main concept I wanted to bring awareness to suicide rates in Japan, they are the highest in the world. The whole song is about saying your last goodbye, but it’s made to support people who go through a part of their life where they feel alone and unwanted. The next thing I thought of was the hikkikomori phenomenon and how very often students in Japan decide to hide away instead of facing society. The video features a sequence where the protagonist at her younger age stands up for bullying and fights back, changes her attitude and becomes a strong adult”.

“The third thing I wanted to address is the protagonists struggle with identity. Many young people – even me – are trying to figure out who they are and where their place in the world is. She decides to become part of the Japanese idol world, modelling for gravure, but it leads to getting bullied at school, as her grades drop from being busy and her classmates find out about It”.

“She has many fans and admirers, but the idol industry requires you to stay away from having a love interest, she can’t get herself to open the letters sent to her”.

The video certainly jumps around with settings and moods delivering a theatrical take on the many themes and ideas expressed in the lyrics, including darker, moodier segments that suggest anxiety and fear.

“The sequence where she is running from the grim reaper, representing her adult self, can be interpreted as her trying to run from her guilt”.

“Finally she wakes up to another self, fights back the bullying and changes her attitude. She decides to open the love letters she received from a boy and grows up. Now this can be interpreted as leaving the idol industry, but I personally prefer it to seeing it as reshaping her image within the industry”.

“And that’s just what I want to do: Create a new type of genre for a new generation of J-pop singer or idol, that is more free”.

The video also addresses the controversial topic of dating rules within the contracts that many idol artists sign. “I know it is controversial of me, making my debut in an environment like that, being married and not fitting the common idol image, but sometimes you have to be brave, to make a change. And though I don’t think I will refer to myself as an ‘idol’, I hope more people will open up and who knows? It might even become a new movement?”

Since moving to Japan, Himezawa has been both thrilled and bemused by the change of gear culturally. “Japan is totally different from the west. I thought maybe sleeping on a futon and using a rice cooker were the biggest change in the beginning – I was so wrong. It was really difficult getting around in the beginning, imagine you are waking up one day and don’t know what 90% of the things around you are called. When I moved to Japan I spoke pretty much no Japanese, except for some basic greetings and tourist vocabulary”.

“I am glad I picked up a lot in the first few months, though I had TV appearances where I couldn’t even read my script in the very beginning. It was a tough journey in terms of language, and I am still not even close to fluent, but at least I can get around without asking people if I could get ‘an owl for my groceries’ instead of a bag”.

Now living in Tokyo, Himezawa has had to contend with the Japanese equivalent of everyday living in the west. “Tokyo is really busy. I thought trains were already crowded to the fullest in London, but you could easily fit another 20 people in those trains. Japan’s working culture is intense, in terms of punctuality, stamina, and commitment. Drinking parties after work are common, and not getting paid for overtime is the norm. I am really glad the entertainment industry, including the model business left out of those rituals, though I have had 12-hour working days with little to no breaks as well”.

It’s an eye-opener for those that think moving to Japan equates to living in your favourite anime. People there don’t run late for school every morning with toast in their mouth (that’s only Tuesdays, Wednesdays and Thursdays). Despite the trials of everyday living in Tokyo, Himezawa still holds a special love for Japan.

“I already fell for Japanese pop culture back when I was still living in Europe but, especially in terms of fashion, Tokyo is a new extreme. And this made me really happy. There isn’t a day going by that doesn’t push my creativity. Outfits as an art form and street snap sites collecting their favorites for the general public. On my first day in Harajuku I ran into three of them, and a TV team, which was a huge surprise for me. Drawing a lot of my inspiration for new outfits from those sites myself, it was a huge honour for me to end up there as well”.

But now with the release of ‘Wagamama Love’, Himezawa can broaden her horizons. When quizzed on whether or not this release will be followed by future releases, the Asobisystem star is coy: “That’s a secret! I will keep doing my best and you’ll see where it leads me. I really enjoy singing and dancing, and that’s what matters to me now: Having fun with what I do”.

‘Wagamama Love’ is out now on the Grow Seeds label and is available via iTunes. 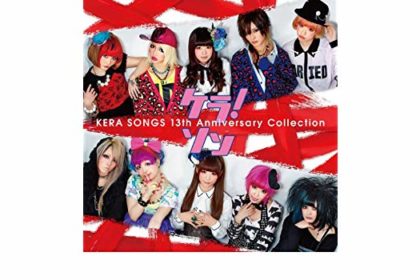