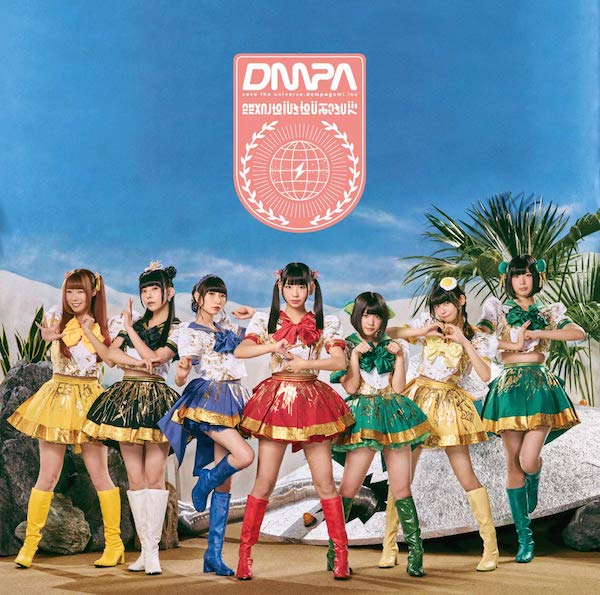 It’s fair to say that Dempagumi.inc have seen some dramatic changes in their career in the years since their last studio album (2016’s Gogo Dempa – see J-Pop Go review previously).

Moga Mogami sadly parted ways with the group in 2017. But that year also saw Dempagumi’s ranks augmented by new recruits Rin “Perorin” Kaname and Nagi “Nemo” Nemoto, who were pulled in from fellow idol outfit Niji no Conquistador. This meant that for a brief period, Dempagumi had a 7-member line-up – and also led to the energetic pop of new song ‘Girametasu Dempa Stars’, which was performed at the group’s Osaka-Jo Hall concert in December that year.

Nemu Yumemi had also announced plans to leave Dempagumi, which she subsequently did in January this year. The same month saw the arrival of the idol outfit’s fifth studio album Wareware wa Dempagumi.inc da, which unusually features seven members in this briefly expanded line-up.

Thematically, the album plays around with space travel concepts and some science fiction touches, which seems on-point given the coming and going of various members. In fact, the album features a logo adapted from the classic NASA design to read ‘DMPA’. As ever, the sleeve design for the album looks slick and polished (the limited edition release even has a neat lenticular sleeve that shows two different images depending on how you hold it).

It’s tough not to spin this album up and not compare and contrast it against its predecessor Gogo Dempa. While the 2016 album had some smart tunes, it didn’t feel particularly well-rounded as an album – and even less so as a Dempa album. Fortunately, Wareware wa Dempagumi.inc da (“We Are Dempagumi.inc”) is an album that shows an idol group refreshed and energised and serves up some superb tunes.

Suitably, the traditional instrumental opening runs like the opening of a sci-fi blockbuster. Its widescreen arrangement feels epic and stirring and serves as an engaging opener for things to come.

Then it’s straight into the kinetic pop of the aforementioned ‘Girametas Dempa Stars’ (which also features regular Dempagumi collaborator Hyadain). It’s an outing that certainly sees Dempagumi return to form. It’s got all the classic elements you’d expect from a Dempa song with the fast-paced percussion and euphoric pop melodies. All this alongside a vocal delivery that suggests you’ve played a 33rpm record at 45rpm (ask an old person what that means).

‘Precious Summer!’ Travels a similar road with some charming vocal melodies thrown in against a ridiculously speedy arrangement. It provides one of the album’s highlights and captures everything that’s magical about Dempagumi.

Meanwhile, ‘Sekai ga Watashi no’ changes gear slightly with a jaunty piano-led number. There’s a bit of a theatrical element to this tune – something that’s also carried over into the following track ‘Kabocha Tandem’.

‘FD3, DEMPA ROCKET GO!!’ reverts back to the space themes of the album with a perky cartoon pop number, which also gives some of the gang their own vocal spotlights.

The idea of combining Demapgumi.inc and iconic anime Sailor Moon seems to be a bit of a no-brainer (it certainly seemed a perfect fit for Momoiro Clover Z in times past). On that basis, their version of the classic theme tune ‘Moonlight Densetsu’ is given a suitably energetic workout. The end result is a stirring cover that also manages to weave in some classic Dempa elements along with a smidgen of chiptune.

Keeping with the anime theme, ‘Ψ Hakkenden!’ Offers a breezy pop workout. Utilised as one of the themes for anime series The Disastrous Life of Saiki K, it’s also another excuse to throw a nod to Dempagumi’s otaku interests.

There’s a busy piano-led workout on ‘Oyasumi Polaris Sayonara Parallel World’, which features a collaboration with H ZETT M. Something which is replicated on ‘Taiyou Keikan Satsuchu Seimeitai’. This features some wistful vocals along with engaging harmonics. In fact, stylistically, this number would have served as the perfect closer for the album.

But Wareware wa Dempagumi.inc da wouldn’t be complete without referencing Nemu’s departure, which results in the suitably titled ‘Evergreen’. The uptempo arrangement and judicious use of strings give the whole affair an uplifting quality, although there’s still an emotional punch at the song’s heart.

Closing the album out, ‘Kenran My Youth’ swings back to a more Dempa-orientated sound along with some choice chiptune elements. The dazzling chord changes and melodic lifts are classic Demapgumi and ends the album on a high.

Wareware wa Dempagumi.inc da seems to be a welcome return to those qualities that make Dempagumi.inc shine brightest. On that basis, it eclipses the rather uneven Gogo Dempa (which, while it featured some fine moments, tended to wander too far off the reservation at times) and perhaps provides a strong foundation for this new incarnation of Dempagumi going forward.