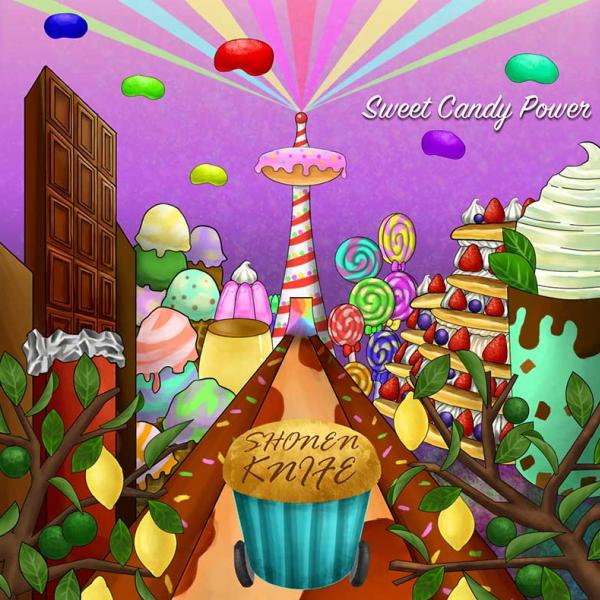 It’s perhaps tough to grasp how long Shonen Knife have been in business as a music combo. Originally formed in 1981 by sisters Naoko (see J-Pop Go interview previously) and Atsuko Yamano alongside Michie Nakatani, Shonen Knife have since cultivated their own quirky pop rock style that brought forth classic tunes such as ‘Twist Barbie’, ‘I Am A Cat’ and ‘Banana Chips’.

There’s always been a simplicity and charm to Shonen Knife’s material, something which led to glowing endorsements from the likes of Nirvana and Sonic Youth. That in turn led to the trio exporting their music to western shores and the rest is history (something J-Pop Go focussed on back in 2012 with our Shonen Knife Week).

The line-up of Shonen Knife has moved around a bit in the nearly 40 years the band has been active, although the current set-up features Naoko, Atsuko and Risa Kawano (on drumming duties). Ritsuko Taneda and Naru Ishizuka (who have been part of Shonen Knife in earlier incarnations) also lend their talents to the latest album.

‘Party’ provides a raucous opener with speedy guitars which seems to be Shonen Knife wearing their Ramones influences on their sleeves.

Elsewhere, there’s a stripped-down simplicity to the pop charms of ‘Dizzy’, whose lyrical narrative dwells on anxiety and pondering on the causes (“lack of sleep or too much video games?”). The clapping elements and Atsuko’s prominent bass add to the song’s appeal.

Then its straight into classic Shonen Knife for ‘Sweet Candy Power’. The misleading gentleness of the intro opens up into a fuzzy delight, which is enhanced by the “Amai! Amai! Amai!” (“sweet” in Japanese) and “Candy!” chants (The video for the track also reunites the whole Shonen Knife family).

There’s a more widescreen rock approach on ‘My Independent Country’ with its impressive percussive foundation. It’s a composition that provides some crunchy guitar goodness on a song where Naoko ponders on running her own country.

Meanwhile, it’s drummer Risa who lends her vocal chops to ‘Ice Cream Cookie Sandwiches’. Essentially, a love letter to the desert treat, this is pure bubblegum pop with some sturdy guitar lines.

The album switches gear for the slow rawness of ‘Never-Never Land’. There’s a similar approach on ‘Peppermint Attack’, which seems to harken back to 80s-era Shonen Knife with its garage punk aesthetic.

Closing the album, ‘Match 3’ drops back into super-speedy guitar work. Here, Naoko muses on the many mobile phone games Naoko plays while travelling on tour.

With Shonen Knife’s 40th Anniversary looming on the horizon, there doesn’t seem to be a hint of Naoko throwing the towel in and retiring. But albums such as Sweet Candy Power demonstrate that there’s plenty of talent and tunes in the band yet.