As the world of J-pop continues to expand its global reach, it’s time for KYARY PAMYU PAMYU to demonstrate how she’s managed to retain her high profile as she embarks on the KPP 5iVE YEARS MONSTER WORLD TOUR 2016.

Marking her third world tour, the latest outing also marks Kyary’s 5th year anniversary since 2011’s ‘Pon Pon Pon’ put her on the map. With an impressive catalogue of songs in subsequent years, KPP has managed to keep at the forefront of J-pop even as new artists emerge all the time.

With her presence in the UK becoming an annual affair, it’s interesting to see how the J-pop princess will fare in the stylish location of Camden’s Koko. The layout of the venue is a little unusual in places with its imposing tiered circles, but the colour scheme and decorative frills dotted around the walls gives Koko both a sense of theatre and also a visual feast for the eyes.

There’s a definite plant theme commanding the stage design with primary colour growths dotted around odd corners, framing the pop art impact of the 5iVE YEARS logo stage centre. That anime ambience extends to the brightly coloured outfits that both KPP and her stage performers (including the green-themed DJ encouraging the audience along) sport for the duration of the gig.

Although the merchandising for the concert felt a little light this year (T-Shirts, but no CDs), Kyary fans were rewarded with free 5iVE YEARS MONSTER-themed plastic wallets for their troubles.

The percussive pop of ‘Cosmetic Coaster’ (the tune that accompanies Kyary’s Universal Studios ride) gives the concert a suitably enthusiastic anthem. Then it’s straight into her latest tune, the electropop confectionary of ‘5iVE YEARS MONSTER’ culled from the KPP Best Of album. From there, the audience immerse themselves in an engaging atmosphere of J-pop perfection.

It’s tough to find fault in the song choices for the evening, all of which prompt a passionate level of audience participation – clawed hands curve skyward during ‘Fashion Monster’ while stealthy martial arts poses received ‘Ninja Re Bang Bang’.

There’s the inevitable interlude segment while KPP and crew take a break as the strains of Capsule cover ‘do do pi do’ does the rounds. Elsewhere, there’s a special love for tunes such as ‘Cherry BONBON’ which prompts a joyful round of synchronized handclapping from the KPP faithful. Meanwhile, the aforementioned ‘Pon Pon Pon’ gets an airing , albeit as part of an extended medley segment of the performance.

To close proceedings, the pure pop of KPP’s last single release ‘Sai & Co’, with its ridiculously infectious melodies, gets a particularly warm reception. Meanwhile the serviceable pop of ‘Kimi ni 100 PERCENT’ and the classic ‘Tsukematsukeru’ serve as encores.

Rumours of Kyary’s retirement or hiatus have been floating around the promotion of the 5 Years Project for some time. It’s significant that she doesn’t announce ‘See you next time!” with a performance of ‘Chan Chaka Chan Chan’ – almost the standard closer of past KPP gigs. At the same time, Kyary’s relentless work schedule over the past five years suggests that she’s ‘wei’ past time for a break.

Significantly, there’s no disappointed faces exiting the venue after Kyary’s latest UK jaunt. This is a fanbase that cultivate both a boundless enthusiasm for their favourite J-pop star as well as a very close sense of community (friendships are forged in the queues outside of the concerts – and the cosplay participation is second to none).

Looking back across those five years, there was a point at which it seemed like getting the likes of Kyary performing in the UK was an impossible dream. The entire landscape has changed over the subsequent years – and we’re left guessing at what the next five years could possibly bring.

J-Pop Go extends its thanks to the KPP team and Good Machine PR. 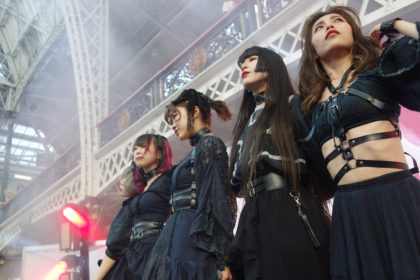