THE TOMBOYS are bathed in green light as they perform their upbeat number ‘Please Remember Me’ on stage at the Underbelly in Hoxton. They’re bouncing all around the small stage, standing on amps, smearing their lipstick, and Madoka even runs into the crowd to jam with the fans during her guitar solo. Everything about them screams high-energy, and as they dance in unison with bright smiles on their faces it’s no wonder that the crowd immediately responds in kind.

The quartet, composed of singer Hina, guitarist Madoka, bass guitarist Wakana and drummer Non, have been making waves in both the UK and Japan recently. Their highly successful return to the UK at Hyper Japan’s Christmas market was confirmation of their influence and status as up-and-coming rock stars. Now the band are back to record their brand-new album, and do a few shows, and J-Pop Go caught up with them on the eve of their very special London headline show.

How have you guys been since Hyper Japan?

Hina: On our social network pages, like Facebook, we’ve received more messages from fans over in the UK than before which is a great for us and we like a lot.

You just toured in Japan again, how was it?

Madoka: Compared to our previous tours we’ve been able to tour for much longer this time, and the reaction of fans in Japan has been different to the last time we were there. People know us before we actually arrive, and they’re also waiting for us to arrive, it’s the same in England now too and their positivity is amazing.

You’re here to record new music, what’s in store for the album?

Non: On our twitter we do a series of Tomboy’s favourites which are a number of songs that we like to cover and there are video clips of us playing these songs, that’s where we will take the main influence for this new album. There will be a similar sound to those songs, so you might expect to hear them in our music.

Can you give us an example?

Hina: It’s not really a specific band or artist or even music from one genre, there are pop artists as well.

Madoka: They’re basically all the musicians we’ve been listening to over the past few months, and we want to incorporate these different sounds and influences on this record. We don’t want to cover a specific band or artist, we just want to use as many musical influences as we can.

Does that mean that your music will be different to what we’ve heard you do up until now, or is your sound evolving?

Madoka: Kind of, it’s music that you haven’t heard us do before. We know the songs but we haven’t necessarily covered them. Even if the songs have been covered by many people, just actually playing through it we notice some subtle differences in each one that makes us think about how we can adapt how we play our instruments and how it will improve how the song sounds. That’s the main thing we’ve been noticing.

Come Back to 19 was focused on how you felt being 19, and the experiences you were having at the time, will you have another theme for your new album or will it be focused on the bands that have influenced you recently?

Hina: For our last release, we didn’t exactly decide on this theme before we recorded it. We made the album, listened through it and then felt that that was the right theme to choose for the album.

Madoka: We’re going to be doing something similar for this album, we’ll get the recording sorted first and then we’ll listen through it carefully and decide how we feel or what we get out of the songs.

Non: We’re trying to make something that’s much better than what we made on our last album release, and each song has its own theme and feeling behind it. I guess once we listen to it all we’ll notice something that comes out of it.

Are you working with anyone on this album? On the last record you worked with Glen Matlock of the Sex Pistols.

Madoka: We will work with together with Glen again!

Last time you talked about how he taught you to tune your instruments properly, will it be like that again?

Madoka: Yes! [laughs] But I fixed how I tune my guitar so we will see.

Have you already met him and started preparing?

Madoka: No, not yet. But we’re here for three more days to make the album, we haven’t got very long to record it.

Since you’re here for a few days, when you’re not busy with recording the album are you hoping to see any bands perform in the UK?

Hina: We don’t have any plans yet to go to any live gigs in London but our main priority here is shopping!

Madoka: We went to Piccadilly and Portobello Market before today and we are planning to go to Camden tomorrow, so there’s a lot of sightseeing involved as well.

You can keep up with The Tomboys on their Twitter and Facebook. Come Back to 19, the band’s current album, is out now and can be bought here. 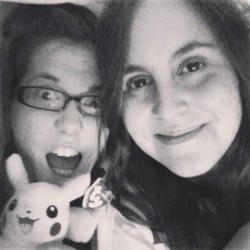