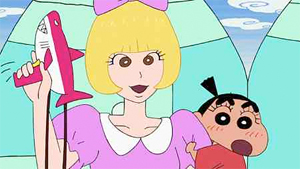 KYARY PAMYU PAMYU is due to make an appearance as herself on the anime series Crayon Shin-chan later this month.

In a remarkable coincidence, Kyary’s new release ‘scheduled for the end of the month is a Double A–side release which features Kimi ni 100 Percent’ – the theme song of Crayon Shin-chan.

Kyary is a self-confessed big fan of both the Crayon Shin-chan anime and manga series. The episode, to screen on 25th January, features Kyary arriving like Matthew Perry’s (no, not that Matthew Perry) black ship expedition which originally opened up Edo-era Japan, only this time Kyary arrives on pink ships.

Instead of introducing Western culture as Perry did, Kyary will introduce false eyelashes, which is fitting as one of her earliest business ventures was launching a successful line of fake eyelashes (the market for fake eyebrows never really took off). The anime-styled Kyary will have a blonde bob haircut with pink ribbon and a matching one-piece dress.