Kanon Wakeshima and her Pop Baroque style has gained a large fan following in her home country of Japan, but she has also become increasingly popular in the West too.

She has been playing the cello since she was three and began writing and performing her own music in high school. Signing to the DefStar label, Kanon also began working with Malice Mizer musician and producer Mana.

Kanon’s debut single ‘Still Doll’ was released in 2008 (and was also the ending theme for the anime version of Vampire Knight). Her first album, Shinshoku Dolce was released in 2009. She has also formed a new group called KanonxKanon with An Cafe bassist Kanon.

I understand that when you were younger, learning music was at times difficult and that you wanted to give up. What was it that made you continue?

There were quite a few times when I wanted to give up but I had a wonderful cello teacher who really inspired me and encouraged me to continue, even when I was finding it difficult, so thanks to that teacher I was able to continue.

You originally hadn’t intended to include the cello in your music, what made you change your mind?

I played the cello from a very young age and there are other instruments that I can play, but not as good. So in the end I decided to play the cello because that was what I was best at.

With music and whatever he does, he has a concept and pursues it to its extreme and has a lot of very specific ideas, so he’s a really interesting person to work with.

How did you come to form KanonxKanon?

We’re with the same company, with the same management and obviously we have the same names – but the music that we’re doing is completely different. So we thought if we do something together then maybe something interesting will come out of this collaboration.

‘Still Doll’ is, of course, famous for featuring in the anime Vampire Knight. Which anime series are your own favourites and which series are you currently watching?

You’ve said that you’re a fan of French musician Emilie Simon. Is she someone you would like to work with in the future?

You seem to know a lot about me! (laughs) I’ve never actually seen her perform or met her so it’s just a case that I’m a fan of her music. But obviously if there was an opportunity to work with her I would love to.

The cello is obviously a delicate instrument, has there ever been an accident with the cello on stage?

I lean it up against a chair, but it has occasionally fallen down and crashed to the floor.

That must be quite scary!

I wasn’t even on the stage when it happened, I was watching one of the staff lean it up and watched it fall!

What are your plans for your next album?

I don’t have any specific plans for an album right now but when I go back to Japan I’m going to be doing live performances in September and October and November. Each performance is going to be presenting my music in a slightly different arrangement. So there’s Jazz and Classic and sort of Rock band style.

I’m going to be doing my music in three different arrangements, see how that goes and maybe that will end up being gathered together for any album. But there are no specific plans right now.

Do you have any advice for anyone planning a music career right now?

It helped me and so obviously when you get to a certain point it really requires your own determination and your own strength, but up until that point the people around you supporting you is something very important and I am very grateful to have had in my own experience.

J-Pop Go gives its grateful thanks to Kanon Wakeshima.

Thanks also to Mary Moreton at Hyper Japan. 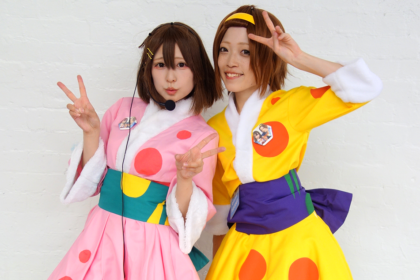