Originally formed in 2008 by sisters Be and Meana during their first year of high school, MUTANT MONSTER initially found inspiration from punk rock – particularly classic UK bands such as The Clash, The Sex Pistols, and The Ramones.

The band were later joined by drummer Chad (who was also a former classmate of the sisters) in 2012. The band built up a following on the back of an extensive number of live shows. They released their limited edition mini-album Follow Me in July 2009 and their first full studio album True Tone followed in 2011.

The trio made their first overseas performance at the Japan Expo in 2016, but also found time to perform in the UK the same year with shows in Birmingham, Cardiff, Bristol, London, and Brighton.

MUTANT MONSTER made their Hyper Japan debut this winter – and also arrived with a special UK release of their album Abnormal. As an album, it encapsulated all the energy and attitude that the power punk trio deliver in live shows. Tracks such as ‘Ray Of Light’ and ‘Abnormal’ reveal a raw, primal quality that’s also matched with tight guitar work and a driving percussion.

The trio kindly took some time out from their Hyper Japan performances to chat briefly to J-Pop Go about the band and their music.

What western acts have had the biggest influence on MUTANT MONSTER’s music?

Meana: When we were little we always listened to British punk music like the Sex Pistols and The Clash, so they are kind of our root. That’s why we want to express our love for these bands through our music, fashion, and other things like that. We love UK punk!

What are your thoughts on the rise of Japanese female-fronted rock acts in recent times?

Meana:: We are happy that girl bands can get out of the country, but we want to be number one so we will defeat them! (laughs)

Are there any particular Japanese music acts that have had an influence on the band?

Chad: We are fans of Guitar Wolf, and one day they told us that we would make it in all over the world. So, that’s why we try to tour outside of Japan. I want our band to be the female version of Guitar Wolf.

Your stage outfits are very striking. Who was responsible for the design?

Chad: There is a designer who lives in Nagoya, and he is influenced by like anarchic things or punk things. So we offered him to create something like this, so we discussed the anarchic things or aggressive things. Then, you know, we created these things – hand-made.

Tours can obviously be a fun experience, but can you tell me about the funniest experience you’ve had on tour?

Meana: When we toured in Canada we had bacon, which was recommended by people: “This is so great!” Then we grilled the bacon in the morning and it created too much smoke, so the fire alarm starting ringing! (laughs).

Be: So the fire fighters then came: “Why did you do this??” We will never do this again! (laughs)

What’s next with Mutant Monster?

Meana: We cannot mention specifics right now, but I guess we will go on a long trip in a foreign country…

J-Pop Go extends its thanks to MUTANT MONSTER and the Hyper Japan press team. 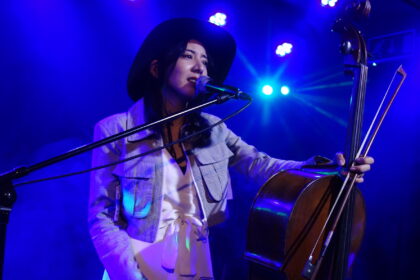