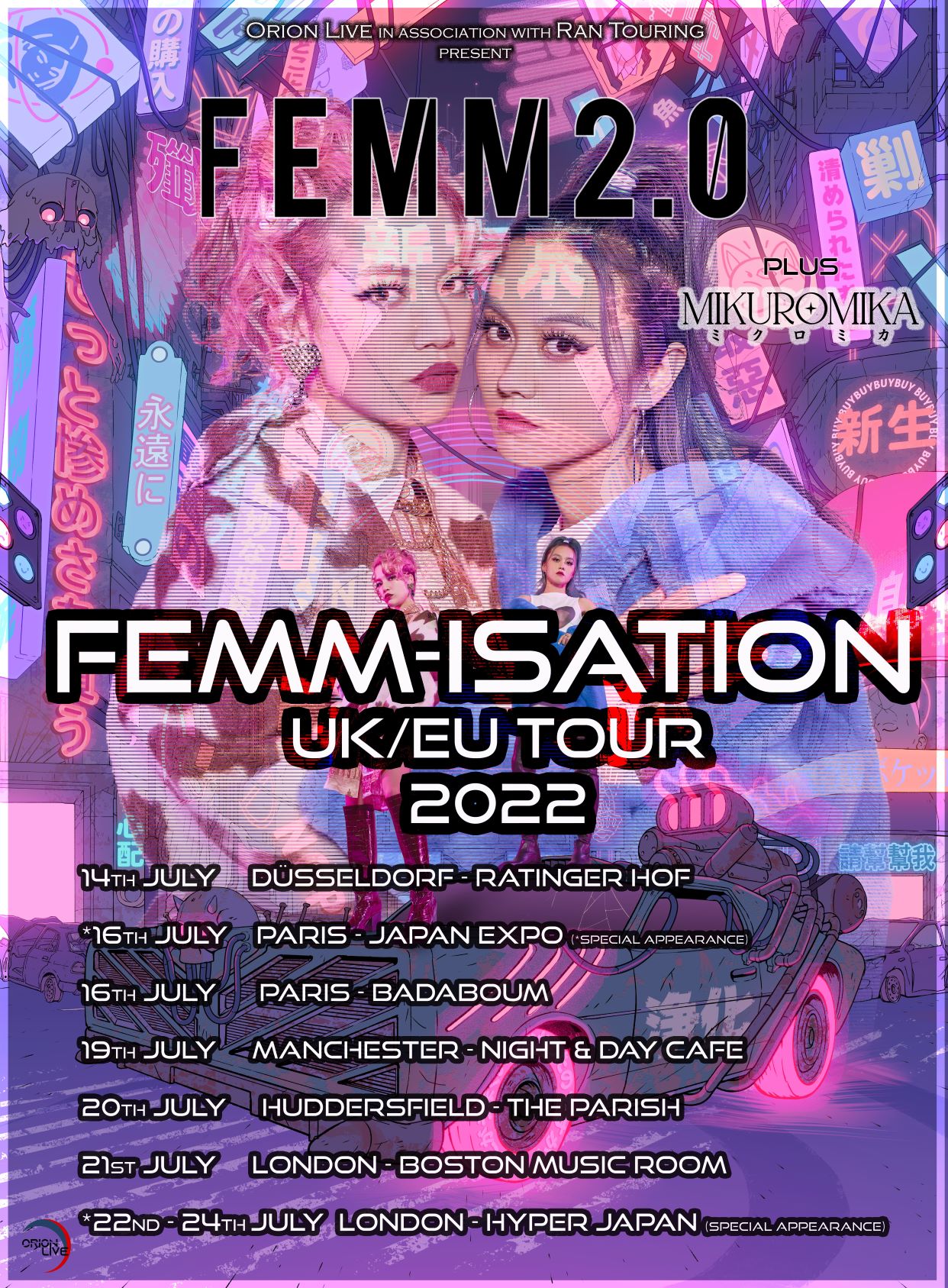 After many international appearances at conventions and events, the rap/J-pop duo are finally stepping out as headliners and hitting the road in the UK and EU this July! Presented by

After many international appearances at conventions and events, the rap/J-pop duo are finally stepping out as headliners and hitting the road in the UK and EU this July! Presented by Orion Live in association with Ran Touring, the FEMM-Isation UK/EU tour 2022 will see the J-pop sensations performing a full- length set of fan-favorite tracks giving fans a long overdue dose of the live experience only FEMM can deliver. Dates and ticket details, including VIP packages, will be announced in the coming weeks.

Supporting FEMM on all dates will be J-pop singer MIKUROMIKA, also touring for the first time. MIKA’s fresh brand of house-infused J-pop, released worldwide via Setsuzoku Records, will be the perfect compliment to FEMM’s iconic sound and presentation.

In celebration of the tour, FEMM’s international label—JPU Records—will be releasing the group’s latest two albums Tokyo Girls Anthem and Tokyo Ex Machina on CD for the first time! The physical releases will be available ahead of the tour. FEMM’s previous releases will also be reissued due to popular demand.

For the latest updates on the tour, be sure to stay connected via social media and the artist’s official website.

Rap duo RiRi and LuLa are two mannequins with a will of their own. Their signature song, “Fxxk Boyz Get Money,” was a girl’s anthem with a poignant message that was supported by American teens and quickly spread to Europe, South America, and Asia by agents (the name of FEMM’s fans) including global influencers.

As a result, their debut album “Femm-Isation” made it to the Top 10 of the U.S. Billboard World Albums chart. In the U.K., they were selected as one of the “6 Acts To Watch in 2016” by the Huffington Post and as the “Best Indies Album” by all HMV stores, opening up a new decade in the female rap scene both at home and abroad. They are also well versed in internet culture, and was one of the first to start the revival that is now sweeping the world, releasing the Vapor Wave interpretation of “80’s-90’s J-Pop Revival”.

In 2020 they released 404 Not Found, a six-song EP with the message of “a brand new sound that doesn’t exist anywhere else (yet)”. This led to an “upgrade” and launched a new era for the iconic duo as FEMM 2.0.

Tokyo Girls Anthem was released in December 2021, packed with a wide variety of rap tracks made in collaboration with globally active hip-hop producers such as Boys Noize and Star Boy. FEMM then released their latest album, Tokyo Ex Machina in January 2022. The artist’s aggressive musicality, which is linked not only to their agents but also to the dark world view and the global trend known as “Hyper Pop,” has garnered deep and sharp attention from both domestic and international media.

Combining elements of house, vocal trance, and J-pop, singer-songwriter MIKUROMIKA is ready for the world. MIKUROMIKA’s chill pop vibe and sleek vocals, which she simply calls ‘MIKUROPOP,’ draws
inspiration from such diverse acts as Japanese R&B legend MISIA, and icons like Lady GaGa and Cindy Lauper. MIKA’s love of music, art, and fashion fuel her passion for performance and positivity and is taking that passion global!

Finding her Tokyo-energized groove in the world of electronic music, MIKUROMIKA is crafting her own path, her own direction, and her own style. Her debut album, ‘MIKUROPOP,’ was released on Setsuzoku Records in 2021 and was produced by Argentinian DJ and producer Delta Ouji. The album features the singles “Good Day” and the Spotify dance playlist sensation “Product Boy”. In February 2022, MIKA released a new three-track EP with the lead single “Ocean”. Continuing to make waves, MIKUROMIKA is planning a new single as she hits the road in 2022. FASHIONxMUSICxART = MIKUROPOP