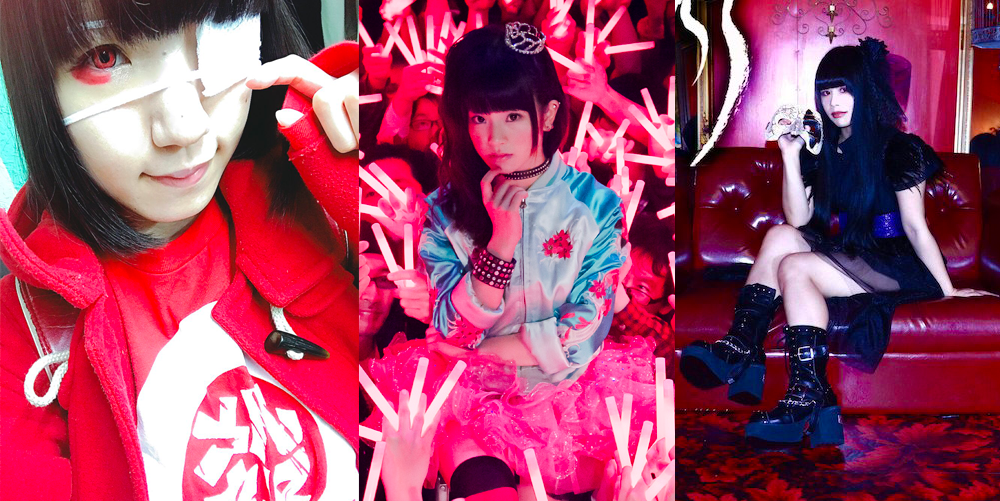 Next April sees an idol extravaganza hitting the UK as the Indie, Idol and Infamous tour arrives on these shores. Orion Live UK, who brought us the Black Winds Over Albion tour in 2018, are responsible for this new venture which will also see the return of 2& (Double And) after her UK debut earlier this year.

Along for the ride are Garuda and Hanako-san, two other independent idol acts guaranteed to make an impression on UK audiences. The tour will take in London, Manchester and Birmingham and full details are on the J-Pop Go events page or on the Indie, Idol and Infamous Facebook page.

Hanako-san’s full title translates to 14th Generation Hanako-san Of The Toilet, which even for an idol is a pretty unusual moniker.

In fact, Hanako-san (who has performed with occult idol outfit Necronomidol) derives from a spooky Japanese urban legend. The story goes that if you go to the third stall of the toilets on the third floor and knock three times, asking “Are you there Hanako-san?”, you’ll get a response. There are variations on this urban tale depending on which part of Japan you’re from. In some regions, if you then go into the stall, you will see a young girl clad in red. In others, a blood-stained hand will reach out for you.

This goes someway to explaining Hanako-san’s use of toilet paper (which is stained red from the blood of 4,444 people). The eye-patch she sports, meanwhile, covers a cursed eye which causes misfortune, hence why it’s hidden. Oh and she’s also 400 years old.

Hanako-san’s idol career kicked off in 2013 and she’s adopted a dramatic screaming style for her vocals, which goes hand-in-hand with the heavier music style she delivers. She also swiftly achieved a reputation for uh… interesting performances. Her shows have previously seen her throwing chairs and mic stands around as well as spitting and chucking food and toilet products into the audience (which suggests something similar to Miss Revolutionary Idol Beserker).

With many idols leaning towards a heavier sound in recent times, the concept of an industrial idol seems like the next logical step. Enter Garuda, whose beefier tunes are likely to win over UK audiences who have been steadily treated to a number of female-fronted acts with a more muscular sound in recent years.

Her tunes are penned by Mr. Perkele – part of the Necronomidol live band (and who also wrote Necroma’s ‘Dawnslayer’). Tunes such as Garuda’s 1st single ‘もうすぐ雪が’ have a crunchy profile about them, which also demonstrates her considerable vocal chops.

Originally starting out as a duo under the moniker Double And, founder-member Saki carried on when her fellow idol Saya left. Rebranding herself as 2& (“Saki+YOU=2&”), Saki (who was also part of idol outfit Guso Drop for a time) has carved out a reputation as a hard working idol artist clocking up a large number of live performances.

There’s a rough, unpolished approach to Saki’s performances which lends an energy to live shows that capture the spirt of underground idols.

Saki previously performed in the UK as part of the Black Winds Over Albion tour (alongside Necronomidol and Screaming 60s) where her dynamic stage style was revealed to UK audiences. Saki indulged in some jaw-dropping backflips on stage during her set, which was all the more impressive given the small size of Camden Underworld’s stage.